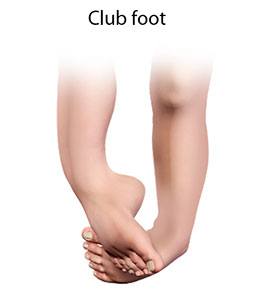 Congenital deformities of the lower limbs are developmental disorders that are present at birth, causing alterations in the shape and appearance of the legs. Several factors such as genetics, teratogenic drugs and chemicals can cause congenital deformities.

Congenital clubfoot is a common and paediatric foot deformity. The feet get twisted inwards and downwards at the ankles in such a way that the ankle or side of the foot meets the ground while walking instead of the sole of the foot. It is twice as common in males as females. The leg and foot may be smaller, and calves less developed than normal.

Diagnosis of paediatric foot deformities involves gathering information about the symptoms and conducting a thorough physical examination of the foot and ankle. Clubfeet can be diagnosed during a routine ultrasound performed during pregnancy itself. X-ray of the foot may be required to confirm the diagnosis made clinically.

The initial treatment for clubfoot is the use of non-surgical methods, preferably begun in the first week of life. Repeated manipulation and casting using the Ponseti method comprise the non-surgical treatment modalities. Following this, a surgical procedure may be performed to release a tight Achilles tendon.