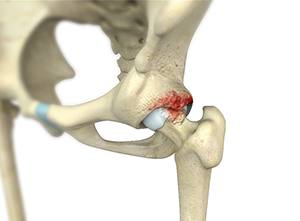 Femoroacetabular impingement (FAI) is a condition characterised by excessive friction in the hip joint from bony irregularities, causing pain and decreased range of hip motion. The femoral head and acetabulum rub against each other, creating damage and pain to the hip joint. The damage can occur to the articular cartilage (smooth tissue that cushions ends of bones to facilitate smooth joint movement) or the labral tissue (the lining of the edge of the socket) during normal movement of the hip. The articular cartilage or labral tissue can fray or tear after repeated friction. Over time, more cartilage and labrum is lost, until eventually the femur and acetabulum painfully impact on one other.

The cam form of impingement is when the femoral head and neck are not perfectly round, most commonly due to excess bone that has formed. This lack of roundness and excess bone causes abnormal contact between the surfaces.

The symptoms of femoroacetabular impingement can include the following:

A risk factor is something that is likely to increase your chance of developing a disease or condition. Risk factors for developing femoroacetabular impingement may include the following:

Your doctor will review your

FAI can be treated with nonsurgical or surgical methods.

Nonsurgical management of FAI will probably not change the underlying abnormal biomechanics of the hip causing the FAI, but may offer pain relief and improved mobility.

Conservative treatment measures may include:

When conservative treatment measures fail to provide relief, surgery is recommended. Hip arthroscopy is performed where the FAI is surgically treated with the help of an arthroscope, a narrow lighted tube with a camera. This is a minimally invasive surgery that is performed through two or more small incisions.