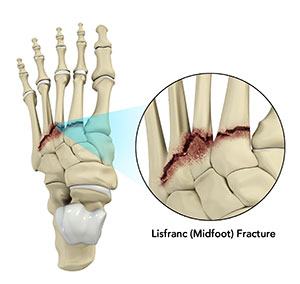 The tarsometatarsal joint or Lisfranc joint is the region in the middle of the foot formed by the articulation of the tarsal bones (a group of seven bones) and metatarsal bones (a group of five long bones). This region supports the arch of the foot. Lisfranc or midfoot fractures are breaks in the bones of the midfoot. They also involve torn ligaments that support the midfoot. The injury can be simple or complex, involving many bones and joints of the midfoot. A Lisfranc fracture is sometimes mistaken for a sprain in the foot when you twist your leg and fall.

Lisfranc fractures can occur due to twisting of the foot (low-energy injury), a fall from a height or traumatic motor accidents (high-energy injury).

A midfoot fracture is characterised by pain and inability to bear weight. The appearance of bruises and swelling on the bottom of the midfoot are commonly observed symptoms.

Your doctor will first examine the physical condition of the foot by inspection and palpation, then order X-rays, CT or MRI scans to provide more information about your condition.

The early stages of injury can be treated with rest, application of ice, elevation of your foot, NSAIDs and immobilisation. The bones may be surgically aligned in correct position and held with screws and pins, or a tarsometatarsal joint fusion may be recommended if all the Nonsurgical procedures fail to show efficacy in treating the injury.